Resolve this : Does 35mm Film beat Digital 35mm and MF?


Fine almost became a four letter word the other day. I mean Fine Detail. A few days back, on twitter, I witnessed a fascinating and passionate debate about the age old topic - Film vs Digital resolution. It began innocently with obvious statements followed by wild counter punches which of course resulted in claims of trolls, twitter blocks and things getting personal.

Being an external observer who saw this back and forth unfold in real time, I could somehow relate to both sides. I mean come on, in this era of 100MP digital medium format backs, some things just seems obvious these days - but wait, there is more than what meets the eye.

But before I go any further, I have to state that I love digital - my workflow is completely digital including a modern film scanner, heavy dose of LR which serves as my content catalog, and PS, where I do all my post. I also have tremendous love for anything analog - I have a darkroom and I love wet prints, alternative prints - cyanotypes, van dykes and salts.

Coming back to topic, I saw a few statements made that stood out. I unfortunately did not see a lot of scientific evidence but angry hand-waving. Being a man of science, I wanted to tackle this issue like a scientist - Let me first define the problem statement and then see what data I can gather to support or reject that statement. Pretty simple, right? The following is my attempt at looking at the film vs digital debate through the lens of resolution.


I saw the following two statements made:

In the course of discussions, I also heard statements like $500 digital camera beats the 35mm film, so that was another area I wanted to double click.

Pretty wild, you may think. Next I tried to define the problem, so we can arrive at something quantifiable, measurable. I started with this term "fine detail" which kept creeping up.

If I could define Fine Detail in terms of something I could use to validate the above statements, I think I would get somewhere. My problem statement was peeking out of the fog.

Some other factors mostly important for digital images are - exposure accuracy, LCA (chromatic aberration) or fringing, artifacts and moiré.

In the spirit of making this a simple enough experiment, I just took the first parameter from the above list - Resolution and for this discussion, I will assume

Fine Detail = Resolution - which I thought in the first place was the key point of the debate.

"...For most photographers, however, the main deciding factor is resolution. The type of photography that you do dictates which parameter is the most important. For example, for scientific, architectural, or aerial photography, resolution is the overwhelming factor. For surveillance, photojournalism, and high-contrast situations, contrast range may be the deciding factor. For portrait photography, color and low grain (or digital noise) may be the major consideration." [2]

Here is my hypothesis, which I will try and prove/disprove:

Now in order to measure and do math, I need a physical sample of a class of equipment referred above and hence the question:

How do we measure resolution of high end 35mm film?

Turns out the same way we measure the resolution of digital sensors and film. It is called spatial resolution. See more here. 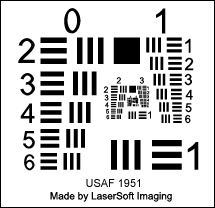 Spatial resolution is typically expressed in line pairs per millimeter (lp/mm), lines (of resolution, mostly for analog video), contrast vs. cycles/mm, or MTF (the modulus of OTF). There are several ways of measuring spatial resolution. For the majority of studies in the field of optics and film, a system known as the USAF 1951 target is used. When I say lp/mm in this post, that is the measurement system that was used.

Most film manufacturers used to and still in many cases publish film resolution numbers for their film in lp/mm and it is these published numbers I will use in our experiment.

The Film vs Digital Resolution Data


I used page 14 of the "Film Grain, Resolution and Fundamental Film Particles" whitepaper that lists the top two 35mm films with resolutions being:

For this discussion I will not use the

Here is a bit more explanation:

Unfortunately that is never the case, it's even worse. Picture details never fall ideally on the sensor's pixels, but rather completely randomly. The system resolution can therefore be roughly estimated with the following equation:

Resolution is measured in line pairs per millimeter (lp/mm), where a line pair consists from a white and a black line.

Now let us calculate the numbers for Phase One IQ 180 digital medium format back:

Here I will just point you to this great article [2]. I will leave you to make your own conclusions.

So here are the results:

So clearly our initial hypothesis that -

However if you assume that the same optical medium is used in either scenario, film does have more native resolution than digital sensors as shown above.

Now this begs the question why would you pay upwards to 25k for digital medium format if the lp/mm is worse.

"... I want to point out that resolution is only one of many parts that affect a camera’s performance. Those elements include, but are not limited to, color accuracy, grain (or noise), and contrast range. When comparing film and digital, additional factors are the ability to process the photo, ease of manipulation of the resulting photo, and the ability to transmit the photo electronically—along with the cost of the equipment versus the number of photographs taken compared to the cost of the film and processing, and any delays the processing may take." [2]


Hope you enjoyed this brief note. Feel free to leave your thoughts.

Posted by Ribnar Mazumdar at 11:06 PM

That's a beautiful article! Thank you!

The thing you've failed to mentioned is that, at ASA/ISO 6 and 32, Kodak Technical Pan and Kodak Panatomic X are extremely low-speed films. They require very fast lenses(no smaller than f/1.4) and/or tripods to obtain a sharp photograph.

...as well as powerful strobes.