To the Victor goes the spoils #WorldCup2014

When West Germany won the World Cup for the first time in 1954, each player went home with 2,500 Deutschmark - the equivalent of around €5,000 today - a television set, a leather suitcase and a motor scooter. 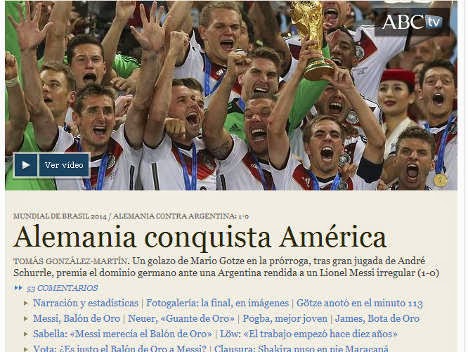 The German Football Association (DFB) will pay the 23 players who travelled to Brazil €300,000 each. Eight players already received €200,000 each for having been selected in the squad for all of Germany’s World Cup qualifying matches. DFB President Wolfgang Niersbach said the association would pay the money “with pleasure”.

The bonuses will not hurt the German FA, which itself will get a record €25.6 million from World Cup organizer FIFA, compared to €18.3 for runner-up Argentina. The DFB expects a €3 million net profit from the World Cup which it will share with German football clubs.
Btw this was the first time a European team had ever won the World Cup held in any of continental Americas.
Posted by Ribnar Mazumdar at 11:58 PM